In 2015, I left my corporate job after a decade to do something groundbreaking—start Work Muse, the sole U.S. company dedicated to the spread of job sharing. It’s clear that the world of work is rapidly changing; millennials through boomers want flexible work, but few flexible work practices give companies the 24/7 work they need, while employees rest, recharge, and return with stronger solution-driven results. Job sharing does.

I know this from my own first-hand experience job sharing, and so do job sharers, their clients, and their employers the world over. And although job sharing has been around since the ’70s, it has remained rare – only 19% of companies allow some employees to job share and less than 1% job share – resulting in most job sharers preferring to stay under the radar in order to protect their work practice.

Beth Malmin and Angela Detviler hit my radar from their Linked In profiles. They were doing something unheard of; promoting their job share as a source of competitive advantage. 71% of job sharers are accepted for promotion as a team, however, only 45% apply for promotion. Job share teams who take pride in and promote the strengths that their arrangement brings to an employer – increased productivity, engagement, and better results – are poised for promotion or acceptance of a job share at a new organization.

I knew right away that we needed to interview them.

The two met working at Target corporate in Minneapolis as the first of two leadership job share teams among 30 across the corporate campus. They led the Organizational Performance Improvement Team comprised of 9 consultants responsible for consulting, training, content development, and training facilitation.

Angela: Beth grew up in HR consulting, I was more of an HR generalist. Learning and development are where our paths crossed. We’d both been talking to our leaders (about job sharing). I moved into Beth’s role and together, we blew up that team in a really good way.

Each worked three days a week with two days of overlap, and both had Fridays off but, remained on-call by phone. The two were interchangeable in day-to-day operations with weekly one-on-one meetings and monthly individual development meetings with members of their team. 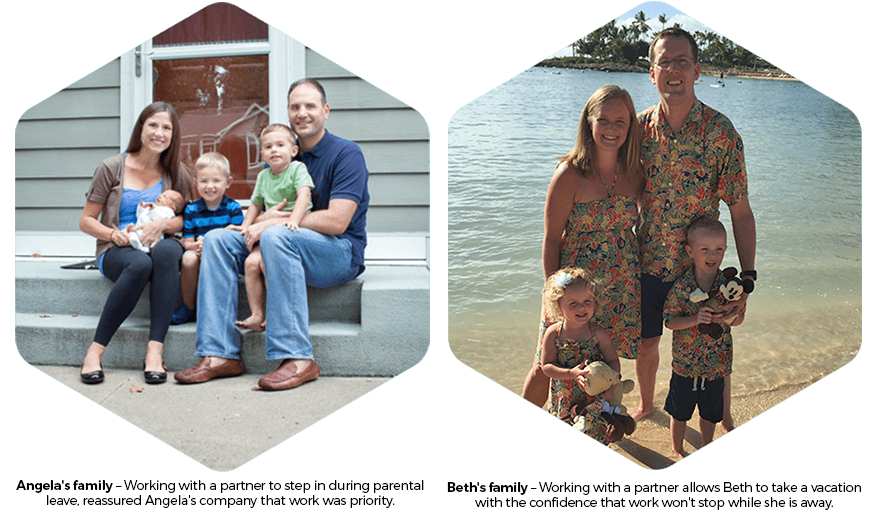 Work Muse: What surprised you the most about job sharing?

Beth: What we found is that when you’re in a job share, you are co-accountable to the results, but there is no relationship like it. Angela gives so much because her success is dependent on mine and vice versa.

I moved into Beth’s role and together, we blew up that team in a really good way.

Angela: Beth and I think of each other as career partners. We’ve moved through three roles together and we don’t have any intention of stopping. Today, we can both confidently tell you that we will move job to job together because we’ve found a partnership that works. We’ve branded ourselves as not only being a good job share team but, when you hire one of us, you get both – we are career partners. We move together wherever our career takes us.

Beth: And, our career has led us to start a business together, B&A Consulting Partners. 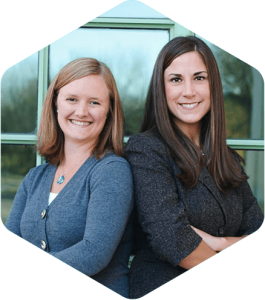 Beth and Angela led their team at Target so successfully, that they were promoted as a job share before deciding to begin their own consulting business in 2015.

Angela: We worked really hard. Promotion at Target was really difficult; we were going for a role with a bonus. We showed the breadth of work and why it required both partners for the expanded scope of work.

Beth: When we hear, “You’re in a job share, we would love to work part-time.” or “I just want to spend more time with my kids”,  it makes us cringe.

Angela: That’s not the story you want to lead with. Think about what’s in it for the company and how that role is going to benefit from job sharing.

Beth: Our goal being in a job share is to make a significant contribution to an organization, which is why we don’t work part-time – we job share. We strive to work on the most important work of an organization.

Higgins: Angela was part of an HR team I was linked to when I worked at Target. I was looking for an Operations Manager at HealthEast, and she contacted me to ask if I would consider a job share for the role. I found it really intriguing, a two for one opportunity. I walked away from the call so energized as to how the strengths of these two people combined really created so much more than what you could get out of an individual player in that same job.

Higgins approached his VP about hiring Angela and Beth but was told the company didn’t have job shares and the timing wasn’t right. He didn’t forget about the team though.

Higgins: We began doing some major bodies of project work – big, hairy pieces that I needed some really great project management skills for. A lightbulb went off and I said, “I wonder if there’s a proof of concept opportunity?”

I reached back out to Angela to talk about working on the nine-month project as contractors. In a week, Beth & Angela interviewed again with four top leaders at HealthEast and wowed everyone.

Beth and I think of each other as career partners. We’ve moved through three roles together and we don’t have any intention of stopping.

Higgins: It’s really hard to talk about them separately. It was remarkable how they leveraged their strengths and channeled one other. Beth is strong on the IQ side – data, facts, analytics – and Angela’s more in-tune with the EQ side of the equation. Those little nuances make a difference. What these guys did and the timeframe they did it in, the way that they brought people along and got them energized about delivering the outcomes we were looking for, is second to none. They brought out the best in me and the best in a lot of things here at HealthEast.

Work Muse: What could have been improved and what did you learn?

Higgins: I look at myself. I suspect I could have been a better leader in terms of developing them individually. They were very explicit about how they communicated and set me up for success to lead them. My sense as a leader of a job share team is that you net so much more. You pay 1.2 FTE but you get better than a 2.0. It’s an incredible ROI, and it’s not about quantity, it’s about quality. The work product is much higher quality and it’s the simple concept of two brains are better than one.

That being said, it’s got to be the right partnership. Either hiring from the outside or internally, if they’re not committed to each other and the success of how it works, it’s only a matter of time before it crashes and burns. You have to make sure that people are getting into it for the right reasons and dig into why do they want to work with that person and how will that help them or the organization. If that can’t be articulated, then you have to pause and send that group back to spend some time together to figure out how this will be a successful partnership.

Work Muse:  What were the results of Beth and Angela’s project?

Higgins: We’re now live on our new technology platform, and quite frankly, these two big pieces of work were critical to being able to turn the corner on the effectiveness and efficiency of this particular function at HealthEast.  It got so much notoriety. I mean, these two became known by our Organizational Sensei. We’re a Lean management philosophy company and look at ways to re-imagine the way we do work. For the first time ever, they removed a priority process from a list, reversed course and said “Now we’ve got this working the right way. The Executive Leadership Team no longer needs to pay you special attention.”

Work Muse: What made it work so well?

Higgins: When we went through the reflection, a big piece was because I had this incredible project management duo that helped drive it – we had a dedicated project job share knock out this amount of work in an exceptionally short amount of time.  They’ve done a great job to set HealthEast up for much better success from a recruiting perspective for years to come.

For the first time ever, they removed a priority process from a list, reversed course and said “Now we’ve got this working the right way. The Executive Leadership Team no longer needs to pay you special attention.”

Higgins: I’ve become a huge advocate. I’ve opened the eyes of HealthEast to the possibilities of job shares, and I’ve got other folks interested too. Our CMO said to me, “This is brilliant, a practice I’d love to consider for my team. I wish I’d have thought of this earlier for myself.”

Work Muse:  What would you want to say to these career partners today?

Higgins: It was really really hard to have their contract come to an end, and I’m still looking for ways to bring them back. I’m excited to see what Beth & Angela do next!

Melissa Nicholson is the Founder & CEO of Work Muse, a job share solutions firm. Job sharing is a partnership between two people to share the responsibilities of one full-time position. Work Muse drives adoption of job sharing in business as a source of competitive advantage while helping individuals find work-life balance. Join the #JobshareRevolution here –– events, resources, and relevant content to empower you in work and life! For more info, hello@workmuse.com.

One thought on “This Job Share Team’s Secret to Promotion”

We use cookies to ensure you receive the best experience on our site. If you continue to use this site we will assume that you are a-okay with our terms.